Aardvark Casting is one of Africa's largest casting agencies for babies, children and adults. Most of the students in the Helen O'Grady Drama Academy join Aardvark Casting.
THE PRINCIPAL
JAYLAN EL ZOHEIRY AND MAIJA LAMU

JAYLAN EL ZOHEIRY AND MAIJA LAMU PHD IN BUSINESS ADMINISTRATION - MONTESSORI EDUCATION PROGRAM INTERNATIONAL
Jaylan El Zoheiry graduated from the American University in Cairo and holds a PHD in business administration. She started her career in marketing I'm Procter and Gamble in Egypt and moved later to Europe to work with P&G where she finished her post graduate studies. Since she loves teaching, she started teaching marketing management to the students at the American University. Through this, she discovered her passion in teaching also children so she obtained a diploma in child psychology. Finding Helen O'Grady fulfilled her passion and love she has towards education, teaching, and development.

Montessori Education Program International (MEPI) Degree
Maija is originally from Finland but has been living in Egypt since 1998. She started her career as professional tennis player which gave her the opportunity to live among different cultures from all over the world. She used to coach children and adults in which she discovered her passion and edge in developing children. She accordingly started her studies in Education and graduated with a pedagogic degree for the Montessori Education International as director of early childhood. While obtaining her diploma for teaching Finnish language and culture through drama, literature, grammar and total physical-response method in the University of Helsinki, Finland, she started to realize how drama can have a huge impact in self-development. In Egypt she worked as the director of a Finnish school as well taught drama for secondary students at the New Cairo British International School.
Maija now runs, with her partner Jaylan, the Helen O'Grady Drama Academy in Cairo.

THE STAFF
MEET OUR AMAZING STAFF

NANCY ALAM EL DEEN
PART-TIME TEACHER
Nancy Alam ElDeen is an Egyptian actress and producer who obtained her honors degree in Media and Theatre from The American University in Cairo in 2016. The uprising talent received training from various well-known professional acting coaches in the field such as; Dr. Mahmoud El Lozy, Luke Lehner, Amr Waked, and Gerald James. Nancy has also taken part as a performer in a number of theater productions, including El Nas Elli Taht and El Nas El Fouq, both directed by Dr. Mahmoud El Lozy, El Kawalees by Dalia Bassiouny, and Hall El Dafayer by Mohamed Fouad and The Motherline Project. Not only that, but she also had numerous appearances on TV in hit series, like Sabe’a Gar, Hekayat Banat Pt.3, Soqout Horr, Newton’s Cradle, and finally, Geziret Ghomam this past Ramadan season. Nancy believes working at Helen O’Grady has given her a chance to witness children’s behavior development using tools of self-expression in an exciting way. “I admire the powerful impact of integrating empathy, creativity and critical thinking into our future leaders.” With Nancy’s experience and uplifting personality, it is wonderful to have Nancy in our team for her second year!

REEM EL MAGHRABY
PART-TIME TEACHER
Reem graduated from the American University in Cairo, double majoring in Theatre and multimedia Journalism. She also studied visual arts and her work has been exhibited around the world, including Berlin and New York. Reem has a great experience in all areas of theatre and she has been part of many performances as the costume crew, assistant stage manager, scenery, lights designer and props master. She also has taken several acting workshops including with Gerald James and Maria Doyle. Her love for theatre and arts led her to our academy where she got the opportunity to develop students through drama. Later in her career, she worked as a special effects make-up artist in the Egyptian television channel and in the art direction field in several well-known projects. She is so excited to give all her experience and expertise to the students of our Helen O’Grady Drama Academy, while also still pursuing her acting career and being part of performances. With all these wonderful attributes, Reem is a great asset to our academy!

AMIRA EL SHORBAGY
PART-TIME TEACHER
Amira El shorbagy graduated from The American University in Cairo double majoring in Theatre and Integrated Marketing Communication. During her university years she was a part of several theatrical shows and has done her thesis in acting performance. She later became a theatre teacher assistant and a part time drama teacher at Helen O’Grady; while extending her knowledge in educational psychology, child psychology and special education needs and abilities through career development courses. She has also been hired by AUC to direct a one act play about ancient Egyptian history where she cast two former Helen O’Grady students that are currently studying theatre. This will be Amira’s 5th year at the academy and we are excited she can continue sharing her experience and talent with our students! Amira believes in the power of Drama as a self-development tool, not only has she witnessed it she has also experienced it firsthand

AMEENA HOUTA
PART-TIME TEACHER
Ameena Houta graduated from the American University in Cairo with a BA in Theatre and a minor in Philosophy. She went on to do a summer internship at Shakespeare Kingsmen’s at Cal Lutheran University in California. Ameena has worked on various dramatic productions including Tartuffe, The Crucible and many others. She began teaching at Helen O’Grady during 2018, and enjoys teaching the curriculum as it brings her joy to see students progressing and developing confidence and creativity. Ameena believes that Helen O’Grady promotes a sense of belonging that encourages the students to become well-rounded and ready to have the set of skills to be successful in their future. Ameena is happy to be returning for another year of fun and lots of drama and we are sure the students are going to love her with her caring, empathetic and sweet personality!
OUR FEES
Our fees vary according to the length of class and location so please contact our office for a quote. 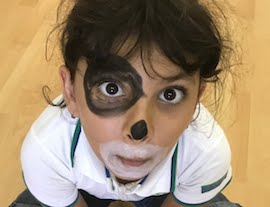 Our Mauritius Principal, Adila Budullah, shows how creativity is the freest form of self-expression in her classes on the island. The Academy has seen such an amazing development in the children th...

One of our greatest successes in the Helen O’Grady Drama Academy is with shy children and adults. Shyness can be very debilitating for the individual.  John Malouff, of the University of... 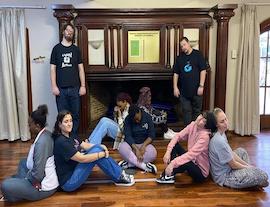 The training of teacher in the Helen O'Grady Drama Academy throughout Africa is a huge priority. With schools running throughout the African continuent,it is important for the Academy to maintain i... 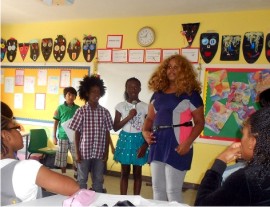 The benefits of drama of quite profound for children and adults. Whether it be after school classes or school drama programmes, research has shown that children emotional, congnitive, social and ph...